The Travel Diary of a Nervous Wreck

The first part of a, hopefully, seven-part series. We'll see how it goes. 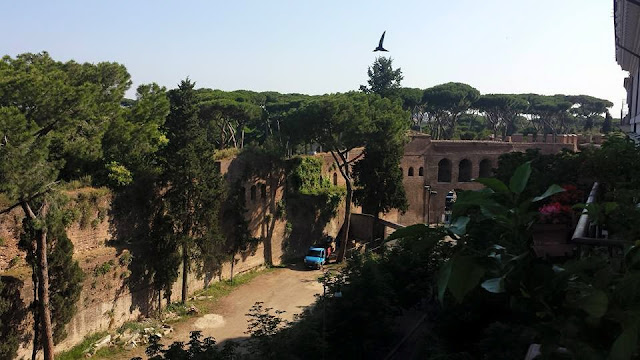 The view from my balcony at Hotel Eliseo

Day one: Off to Rome We Go

I’m pretty sure a taxi from Rome’s Fiumicino airport doesn’t cost $160 US, but I’m too tired to care. I hand Marco a wad of cash, thank him for financially raping me, and head into The Hotel Eliseo located at 30 Porta Pinciana, Rome.

At least he was nice enough to slow down, point out the window and give quick rundowns of the ancient ruins passing by at a disappointing rate.

We are on day one of a seven-day, three-country video shoot, which we somehow finagled our way into. I can’t say much about it, legally, but I will say that this is going to be a priceless trip.  ‘We’ are David, a young videographer who cut his teeth in Detroit and myself.

A car service picked us up from my Brooklyn apartment at 1:30 sharp for our 4:30 flight. This is David’s first time out of the country and it was painted it on his face.

We both settled into our seats on American Flight 4265 to Rome. Somehow, we both had rows to ourselves.

“He’s coming for your empty seat,” a guy with a sport-fishing t-shirt and thick plastic sunglasses resting on his heads the next row over said pointing at the last person to board the plane.

And sure enough, a man with painted on black jeans and a Garfunkel Afro, passing several empty rows, grinned at me while squeezing his way into the window seat.

If a year-and-a-half of riding the NY subway has taught me anything, it’s to be decisive and move quickly. I gathered my things in search of solitude among the masses.

At least the plane wasn’t full.

Of course when we landed in Rome my checked bag was misplaced. But security was properly lax, and even though the ride ends with Marco the cabbie overcharging me about $100 dollars for the ride, the air coming through the open windows was sweet, the scenery spectacular and the conversation minimal and interesting.

We arrived at our Destination Hotel Eliseo at 8:30 am, just as the city was coming to life. We droped our bags and headed to a café for what David called the best cappuccino of his life. It was decent.

But in my experience, when everything feels right something is wrong.

Planning for an international video shoot with extremely tight deadlines is going to test our mettle for sure, but first thing’s first, I’ve been up for what feels like 30 hours straight, my wallet is $160 lighter and we are already late for my first interview with the head of branding for a major corporation.

I’ve spent the last three months prepping for this trip and here I was, hurriedly schlepping about 60 pounds of gear through the ancient cobble stone streets of Rome.

Is that Caesar Agustus’ house? Who gives a fuck.

But, all of the pre-planning meetings, late night emails and constant text messaging were not for nothing. The shoot went well, the footage looked great and all was right with the world.

Practice might not make perfect, but it sure as hell helps.

At the end of the interview I asked the ever-important question: Where should we eat? The interviewee was kind enough to share a list of her favorite authentic restaurants.

David and I meandered our way to a suggested pizza and pasta place called Montecarlo where you’re given two options for beverages, bierra or vino. We went with bierra.

We ate too much pizza and got a little drunk on a local beer called Nastro Azzurro.  Which may have been the cause for our rather loud and jovial conversation about the plight of Detroit, gentrification in Brooklyn, the state of the social justice in America and how none of that mattered to us at the moment.

After dinner, we walked around the city, discovering ancient ruins around every corner ending at a random castle I’m sure I’ve seen in texts books and probably wrote an essay about in college.

We hopped in a cab and found our way back to The Eliseo around 1:30 am; a fitting ending to an exhausting day.

There’s so more. But it’s late now and I’m tired, and there are many more miles to go.
Posted by Unknown at 5:26 AM No comments: